Fossil localities are supposed to reflect a nation’s own geographic divisions and Madagascar was recently reorganized politically.  Its six historic provinces were dissolved in 2007 and broken up into twenty-two separate regions.

Although they are still commonly used to describe the country, using the former provinces is technically incorrect for labeling purposes.  Additionally, Madagascan place names often have different spellings including French ones. These colonial versions were officially abandoned during the 1970’s and 1980’s to reflect the nation’s sovereignty after gaining independence from France in 1960.

Since many customers are more familiar with these older names, we continue to list the regions, provinces, and French and Madagascan names on our fossil locality page to prevent confusion. 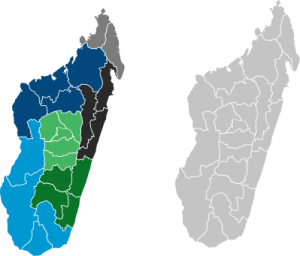 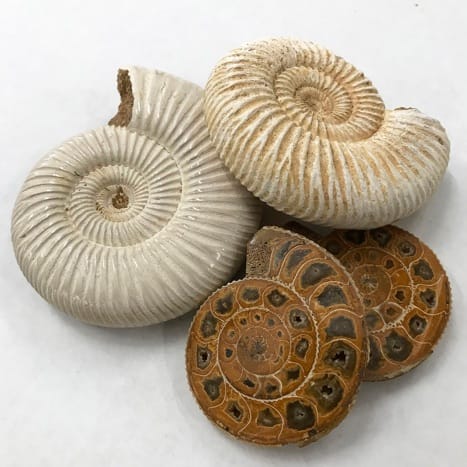 Madagascan law prohibits the exportation of all vertebrate fossils and invertebrate fossils must be processed in some way.  For example, these Jurassic ammonites (Perisphinctes sp.) have been buffed, polished, and cut into pairs.  Since this can remove specific features used to distinguish between species, we list their known genus instead.

All of these Madagascan fossils come from the Mahajanga River Basin, near the village of Ambatolafia, in the Boeny region of northwest Madagascar, located in the former Mahajanga Province.  (Province de Majunga in French.)  They date from the Early Cretaceous period, Albian Age (~100 to 113 million years ago).

The ammonites and nautilus from Mahajanga are typically preserved by yellow to brown calcite in glauconitic sandstone.  The same locality produces a more limited number of white and black fossils, colored by manganese.

(* = Some scientists believe that this common variety of Madagascan ammonite belongs under the Aioloceras genus instead.) 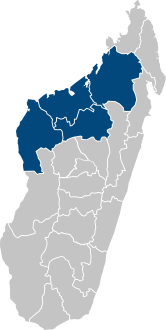 Extra large ammonites are sometimes found near the city of Befandriana Nord (also known as Befandriana Avaratra or Befandrina) in the Sofia region of northern Madagascar, located in the former Mahajanga Province.  (Province de Majunga in French.)  They are preserved by yellow to brown calcite like those from the Boeny region.  Unfortunately, nothing is known stratigraphically about this site but some of the genus found there like Pachydiscus only come from the Late Cretaceous, especially the Maastrichtian Age (~66-72 million years ago).

The same locality also produces ammonites preserved by bright orange calcite. Some of the genus found there like Argonauticeras usually come from the Early Cretaceous instead, especially the Aptian Age (~113-125 million years ago).

These extra large ammonites were once thought to come from Morondava in southwestern Madagascar but our research determined they were actually coming from Befandriana Nord.

The primary source for our septarian nodules is near the village of Ambondromamy, in the Betsiboka region of northwestern Madagascar, in the former Mahajanga Province.  (Province de Majunga in French.)  They date from the Middle to Late Jurassic (~145-174 million years ago).  The yellow septarian, brown “dragon” septarian, and septarian with ammonite fragments all come from the same area.

We have recently started to carry a small number of Madagascan fossilized crabs (Macrophthalmus sp.). Little is known about the locality, except that they come from the former Mahajanga Province.  (Province de Majunga in French.)  They date from the Pliocene Epoch (2.58- 5.33 million years ago).

All of these fossils come from the Morondava River Basin, near the town of Sakaraha (also known as Zakaraha or Sakkara) in the Atsimo-Andrefana region of southwest Madagascar, located in the former Toliara Province. (Province de Tuléar in French).  They date from the Late Jurassic Period, Oxfordian Age (~161 to 156 million years ago).

The ammonites and nautilus from Toliara are typically preserved by white, red, or brown calcite in limestone.

(*= Most Madagascan Oxfordian ammonites are Perisphinctidae.  Otherwise, they usually belong to the Phylloceratidae, Aspidoceratidea, and Sphaeroceratidae families.   The massive ammonites usually sold as Lytoceras sp. are more technically Lobolytoceras sp.) 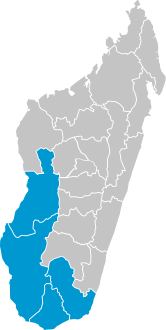 Our heteromorph ammonites (Nostoceras sp. and Eubostrychoceras sp.) are found near the village of Morafena, in the Menabe Region of western Madagascar, located in the former Toliara Province.  (Province de Tuléar in French).  Since the nearest large city is Belo sur Tsirbihina (also known as Belon’i Tsiribihina), the locality is often named after it instead. They date from the Late Cretaceous Period, Campanian to Maastrichtian Age (~72 to 66 million years ago).

Although petrified wood comes from several localities in Madagascar, our primary source is near the city of Ankondromena, in the Menabe region of western Madagascar, in the former Toliara Province.  (Province de Tuléar in French).  Because deposits of different ages are often mixed during collection, scientists date it broadly as Triassic in age (~252-201 million years ago).  Most Madagascan material is preserved Araucarioxylon wood, a genus of evergreen trees related to the modern araucarias.

Fossils from Other Regions and Countries

Our coprolite comes from central Madagascar.  The exact locality is currently unknown. Madagascan coprolite is thought to be Early Cretaceous in age (~146 to 100 million years ago).  Madagascan coprolite is sideritic, preserved by the iron oxides siderite and limonite.  Sideritic coprolites are currently a matter of debate in the paleontological community.  While some people believe they are coprolites, others theorize that they are cololites, fossil casts of the intestinal tract rather than dung, or just iron nodules instead.

Confusingly the name copal is used for both fresh tree resins from Mexico and Central America and partially fossilized resins found around the world.  While amber is millions of years old, copal is hundreds of years old.

Madagascan copal is the preserved resin of Hymenaea verrucosa, the East African copal tree. Although copal comes from several localities in Madagascar, primarily in the north, ours is currently found near the town of Nosy Varika, in the Vatovavy Fitovinany region of southeast Madagascar, in the former Fianarantsoa Province.

There is no consensus on the age of Madagascan copal.  The island has both shallow deposits of older copal and living trees which continue to leave resin on the surface today.  Deposits of different ages are often mixed during collection.  While some scientists date it more broadly from the Quaternary Period (Less than 100 years to 2.5 million years ago), others specifically limit it to the Holocene Epoch (Less than 100 years to 11,700 years ago) instead.

However, the most recent research on Madagascan copal (Xavier Delclò et al. 2020) suggests that most of it is much younger.  Samples from around the country were all found to be under three hundred years old using radiocarbon dating.

While we are best known for Madagascan materials, we also carry some Indonesian and Moroccan fossils.

The fossils used to create our stegodon bone beads and masks are found near the Solo River on Java, Indonesia.  While the age of Indonesian stegodons is debated, the consensus appears to be the Late Pliocene to Early Pleistocene (3.6 million to 780,000 years ago.)